The kaki tree in Nagasaki

Some trees, in special places on earth, possess immense powers. One of them is the Nagasaki kaki tree. This tree has a huge capacity for survival, a healing energy it can offer to humanity, the earth itself and all life on it. These powers are needed in particular in times of unrest and war – the times of our lives.

The Kaki is situated near the place of impact of the plutonium bomb dropped on Nagasaki on the 9 th of August 1945 . This bomb signified the end of the World War II. The city of Nagasaki was largely destroyed and a high percentage of the population died. Miraculously this tree survived. His power to survive makes this a World Tree. 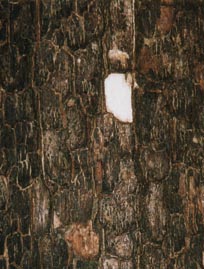 After several fruitless efforts to contact someone in Japan in order to obtain material from the Kaki, I decided to go to Japan myself. I arrived in Nagasaki , three days after the commemoration ceremony on the occasion of the disaster happening fifty-five years ago. Finding the Kaki was a very special process because it happened by accident and synchronicity. My supposition of the healing powers of the Kaki was confirmed on the spot by an inhabitant of Nagasaki . He also helped me to find the tree. He told me that he was a bomb victim and had been drinking tea made from the kaki leaves for his physical problems for more than ten years. To search and find this tree was a most special occasion.

The trunk and roots are conspicuously black but there is a snowy white layer under the cortex of the trunk. This white layer is not present in other kaki trees I have seen since.

The Kaki stands in a place where it was able to survive the destructive effects of the plutonium bomb, the inferno. At that time everything in the area had died because of vast air pressure blasts, fire and the radioactive, poisonous plutonium. Death raged all around. The survivors suffered terrible consequences such as swollen scar tissue, internal haemorrhage, hair loss, cancer, leukaemia and congenital defects.

The plutonium bomb and the Nagasaki Kaki both stand for the end of World War II. An end to destruction, domination, rape, death and being on the run. Plutonium: death and destruction. Kaki: survival and a new hope.